Science has proven that men find it increasingly difficult to get it up and keep it up as they age.

However, these days, a lot of younger men are also struggling with the problem (study). 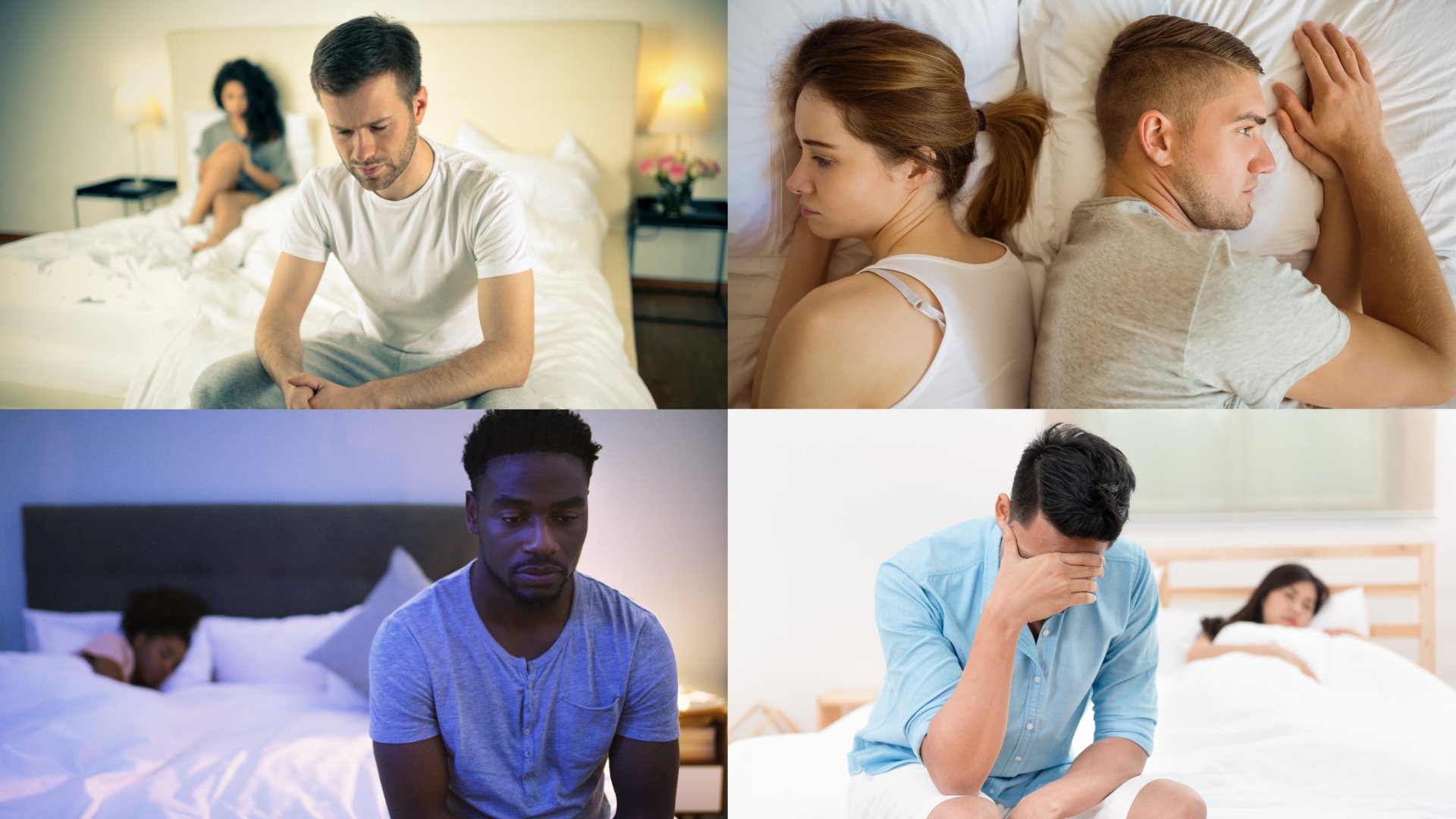 Thankfully, erectile dysfunction is usually something that can be fixed and avoided so a man can enjoy the confidence of being able to get it up and keep it up whenever he wants.

Here are the 5 ways to fix erectile dysfunction that I’ll explain in this video:

When a guy loses his erection during sex, or can’t get it up and sees how disappointed the woman is, or feels disappointed with himself, it can really start to mess with his confidence.

He can easily develop what is known as performance anxiety, where he feels anxious about how he’s going to perform when the sex begins.

The worry and anxiety cause his stress levels to increase, which then makes it even more difficult for him to gain and maintain an erection.

One solution for performance anxiety is to use the following mindset:

“I don’t have to perform. I just have to allow myself to enjoy it.”

Thinking in that way takes the pressure off and allows you to do what will result in you feeling aroused, becoming erect and staying erect.

That is, you will be focused on enjoying the sensations of the sex.

Think about the times when you’ve been enjoying the feel of a woman’s skin during sex, her breasts, the shape of her hips, or butt and the pleasure of the sex overall.

In those moments, you feel most turned on.

Just enjoy the physical and emotional sensations that come with sex, rather than worrying about performing for her.

The more you worry about performing for her, the more difficult it will be for you to gain and maintain an erection.

2. A supplement you can take 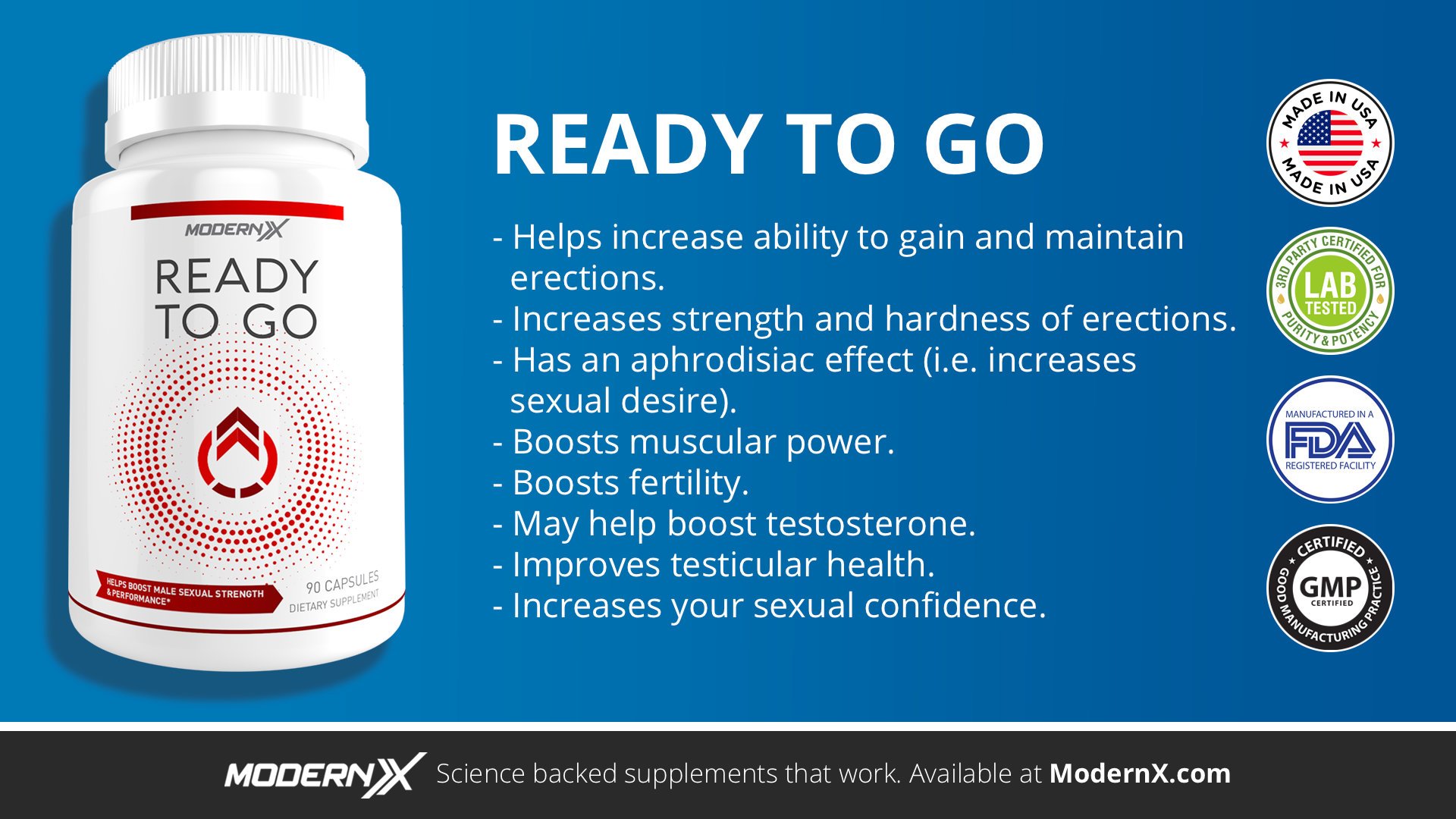 The main ingredient in ready-to-go is Tribulus Terrestris and multiple studies have confirmed that it increases a man’s ability to gain and maintain erections.

Ready To Go doesn’t work like Viagra, where you take it and then 30 to 40 minutes later, you get an erection and it doesn’t go away for a number of hours.

Instead, you take Ready To Go as a daily supplement and after a few days, you will notice a significant improvement in your ability to gain and maintain rock-hard erections.

As long as you continue taking the supplement, you will literally get to the point where you are always ready to go.

You can instantly get a rock-hard erection to begin having sex and then maintain it during the sex, without any problems.

3. A state of mind to get into 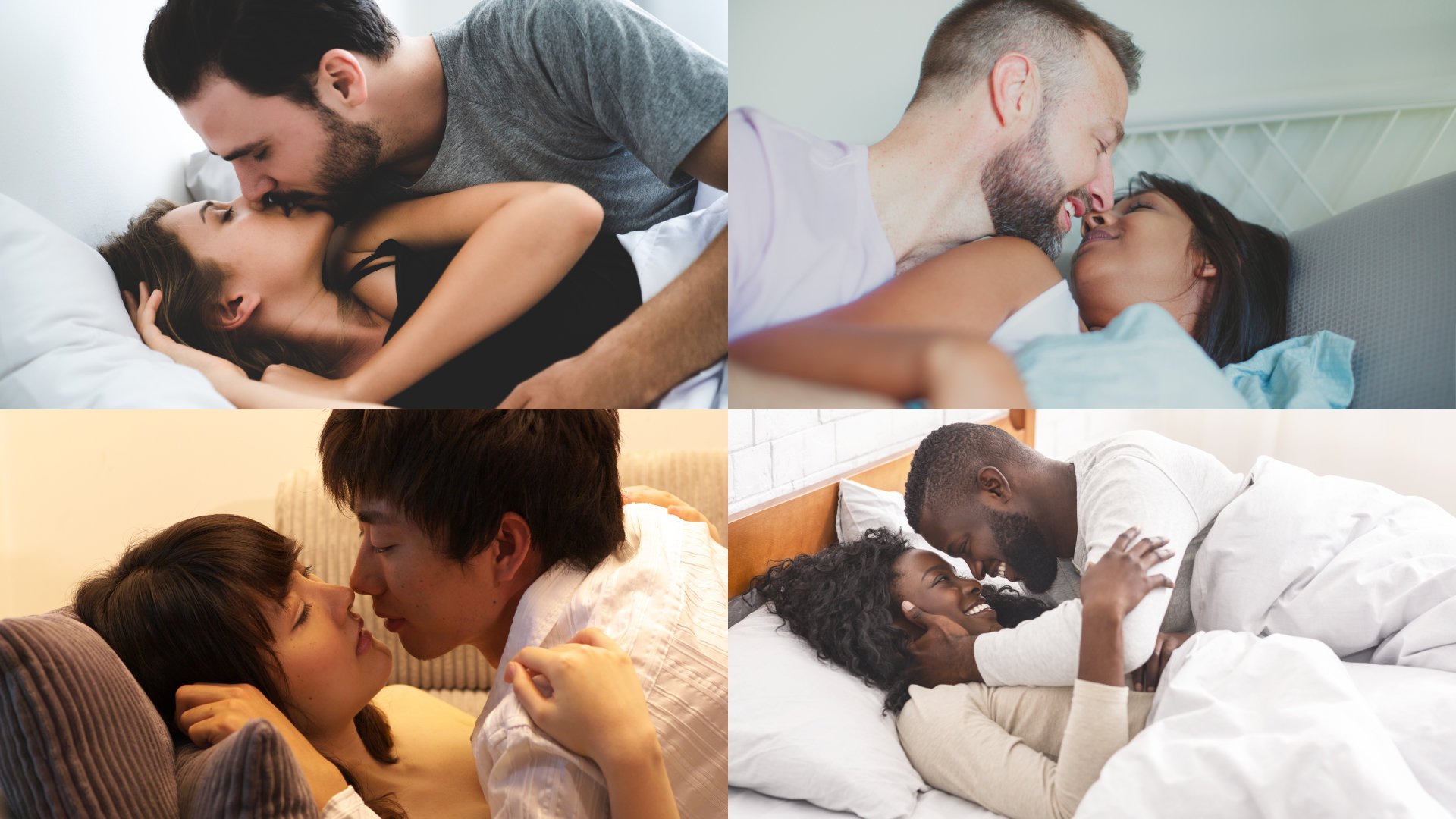 A mistake that some guys make with their state of mind is to get into a battle in their own mind, where they’re trying to convince themselves to become erect or stay erect during sex.

For example, if he can’t get it up initially he may begin to worry and say to himself, “Come on, don’t stuff this up, you really like this girl.”

Alternatively, if he begins losing his erection during the sex, he may say to himself, “No, no, don’t go soft, stay up!”

Yet, that approach doesn’t work because it causes your stress levels to increase.

It also starts to take your focus away from what you actually need to be doing, which is enjoying your attraction and desire for her and enjoying the physical and emotional sensations that come with the sex.

So, the state of mind to get into is where you allow your attraction and desire for her to cause your erection, rather than worrying and trying to convince yourself to become erected for other reasons.

Then, let go of any other thoughts.

In a relaxed manner, become single-minded, where you are only focused on enjoying the pleasure of your attraction and desire for her.

By getting into that state of mind, you are going to enjoy the sex so much more and so is she.

She’s going to see that you are present in the moment and you’re not all up in your head worrying about what you’re doing, or how you might stuff up.

When she senses that confidence, she feels more attracted and turned on by you.

Meanwhile, in a relaxed manner, you are allowing your attraction and desire for her to cause your erection.

You are not worrying about what could go wrong.

You are focused on enjoying the pleasure and sensations, in a relaxed, confident manner.

4. An insight to know about a woman’s expectations of a man’s erection

A very small percentage of women are cruel and will get angry, or show disgust towards a man if he can’t get an erection or keep an erection during sex.

That will usually be due to the woman’s insecurities, where she has experienced the same thing with other guys and is beginning to think that she is the problem.

Alternatively, she might not be insecure and may be very confident about her attractiveness.

In cases like that, she will be disappointed that the guy she thought would be confident in the bedroom, turned out to be insecure. 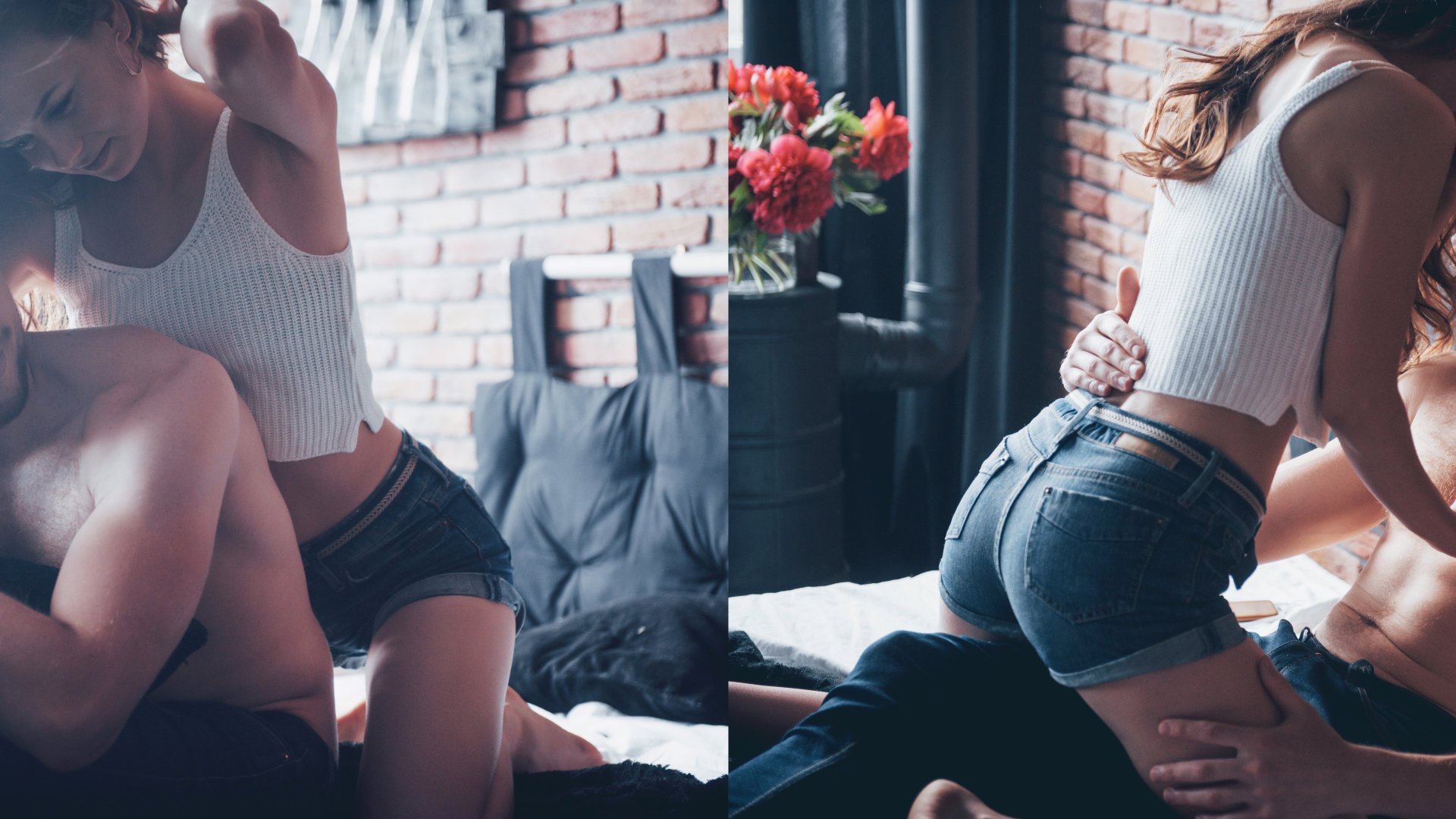 All that aside, pretty much every other woman knows that at some point, a man may struggle to get an erection at the start of sex or may lose his erection during sex.

Overall though, a woman doesn’t want a man to make a big deal out of not being able to get an erection or maintain his erection.

Instead, if he can’t get it up initially or loses his erection during sex, she wants him to remain confident and relaxed and just focus on confidently, calmly and genuinely being physically affectionate with her, or turning his attention to her for a while.

In almost all cases, a woman doesn’t care about it, as long as the man is confident and is genuinely wanting to touch her and connect with her physically and emotionally, rather than him freaking out worrying and only touching her to buy himself some time to hopefully get an erection.

If he relaxes, stops, worrying and allows his attraction to cause the erection, it will arrive and it will stay.

5. A way of thinking to avoid

A way of thinking to avoid is any type of thinking that causes you to unnecessarily worry, or feel fear or anxiety.

The way that it works is that when a man becomes fearful, anxious, or worries too much, the fight or flight response of his by will automatically switch on.

The body doesn’t actually know that the situation isn’t dangerous.

Instead, it reacts to the thoughts that a man is thinking and the emotions he’s feeling as a result.

It then responds by increasing stress hormones, such as epinephrine and norepinephrine.

The body stops focusing on trying to reproduce via sex.

That becomes unimportant and survival becomes the number one priority.

So, the body puts all of its energy and focuses on trying to survive or escape the danger.

As a result, a man’s ability to gain and maintain erections is pretty much shut down by his fight or flight response.

The solution is to disconnect from the fear, anxiety, or worry by calmly and briefly reminding yourself, “There’s nothing to worry about.”

Additionally, allow your attraction and desire for her to cause your erection.

Let go of any other thoughts.

In a relaxed manner, become single-minded where you are only focused on enjoying the pleasure of your attraction and desire for her.

So, briefly and calmly remind yourself that there’s nothing to worry about, then use the mindsets and solution that I was explaining for you in this video.

Focus on feeling attraction for what you’re seeing of her down there.

What you’re seeing of her here, her face, her hair, the shape of her hips, her butt, the feel of her skin and so on.

Focus on that and when you do, your erection will come and it will stay.

ModernX supplements that strengthen erections and make it easier to become and stay erect: